20 Apr A Short History of Fairmont

A SHORT HISTORY OF FAIRMONT

In the beginning, there was a man called James Graham Fair (1831–1894). Irish by birth, he emigrated to the United States and headed west, working as a miner first in California, then in Nevada. There, in 1873, he struck gold.

As a young prospector, Fair and three other Irishmen chanced on what became known as the Big Bonanza, the largest single deposit of gold and silver ever located. Soon, they became known as the Silver Kings. Fair was not just wealthy. Within the decade, he had been elected to the US Senate.

But politics interested him less than business, and he used his wealth—he was said to have been worth 50 million dollars— to invest in the railroad and in real estate. Among the acquisitions he made in the years before his death was the prime San Francisco land on which the first Fairmont Hotel was built. However, Fair did not live long enough to see it.

That was left to his daughters, who inherited both the land and their father’s nose for business. Fair and his eldest child, Theresa, were not close. He had divorced his wife, and their children had been raised by their mother, resulting in an acrimony between him and Theresa that meant she did not invite him to her wedding to the steamship tycoon Hermann Oelrichs. Even so, Fair had given her a million dollars as a present. Her sister, Virginia, meanwhile, married William K. Vanderbilt II, president of the New York Central Railroad. 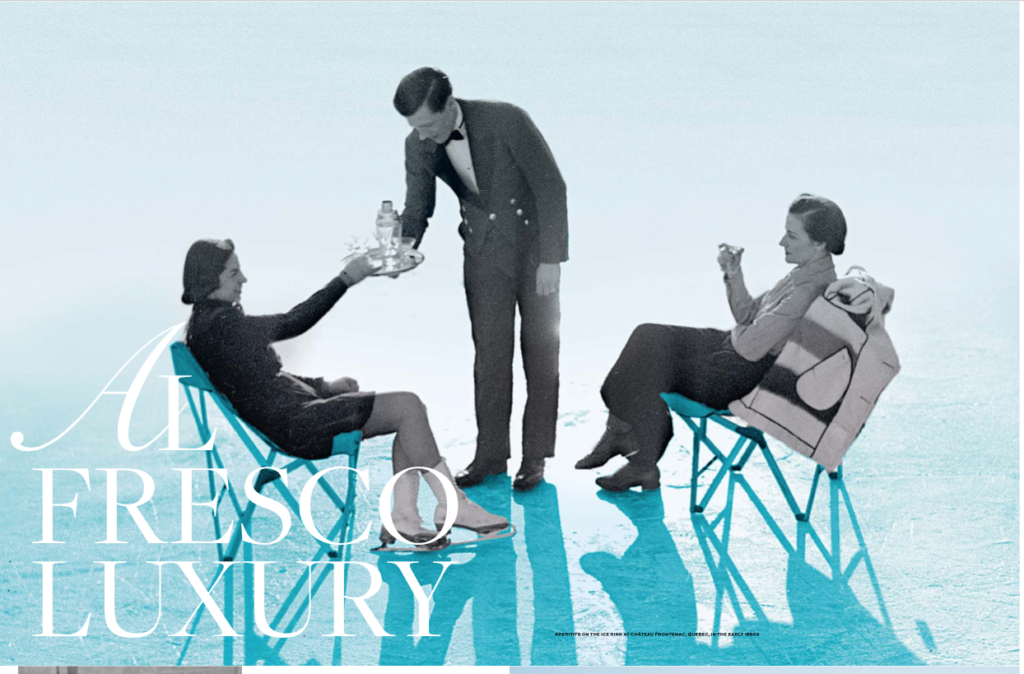 Despite their wealthy marriages, the sisters were determined to make money of their own so they decided to build a hotel on the land their father had left them. They called it the “Fairmont,” a conflation of their maiden name and the fashionably French word for mount—mont—because it stood near the summit of Nob Hill, in the most sought after part of the city. But just before they had planned to open the hotel in April 1906, they suddenly sold it. Five days later, San Francisco was hit by the 7.9-magnitude earthquake that ravaged the city.

They had inherited their father’s luck too. Fortunately, the building survived more or less intact—the sisters had not stinted on the quality of its construction—but its stately interiors were destroyed by the fire that followed the earthquake. Its new owners commissioned Julia Morgan, the first female licensed architect in California, to restore them. (She went on to design Hearst Castle, 250 miles south along the Pacific coast at San Simeon.) And her designs were more impressive still, so splendid in fact, that on its completion, Theresa Fair Oelrichs, by then a widow, bought it back. 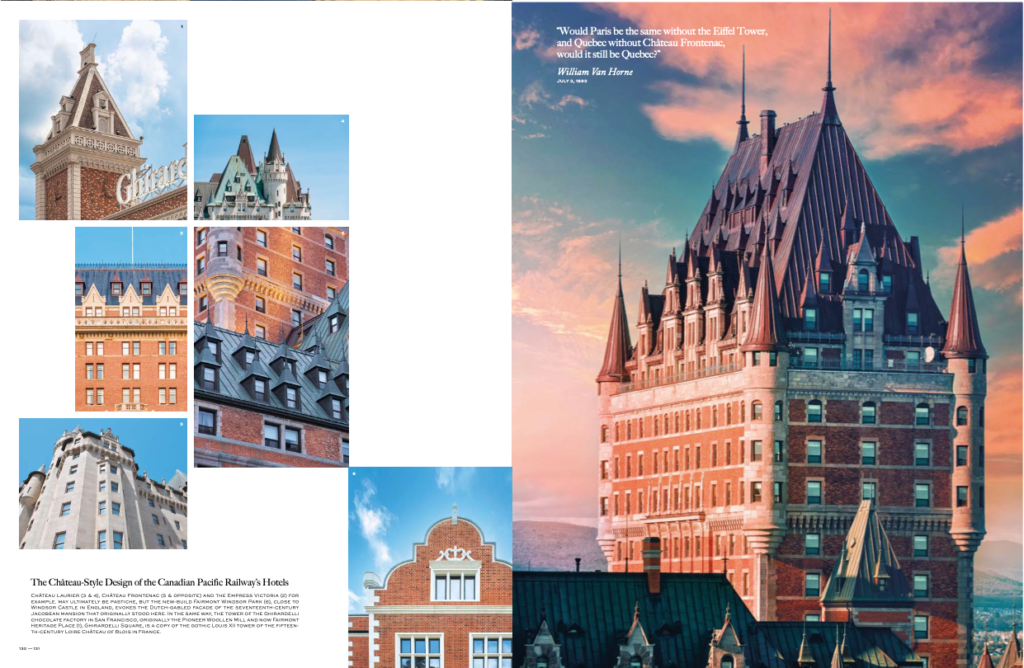 The last decades of the nineteenth century had seen the creation of a coast-tocoast railway not just in the United States, but in Canada too, and with it a growth in the number of grand hotels. Having started work on the Illinois Central Railroad at the age of fourteen, William Van Horne had become general manager of the then-unfinished Canadian Pacific Railway in 1881.

Entrepreneurial by nature, he saw potential in the company that went far beyond track and trains. The railroad had made accessible some of the most dramatic mountain landscapes in the Americas, a terrain to rival the Alps (where tourism was already established), rich in hot springs and potential for winter sports. If people were to travel to the Canadian Rockies, they would need places to stay. Build splendid hotels, and they would become destinations in themselves, attracting travelers in search of the sublime. “If we can’t export the scenery, we’ll import the tourists,” Van Horne said. And he did.

In 1887, the Canadian Pacific Railway opened the Banff Springs Hotel in the heart of what was to become Canada’s first National Park. Van Horne had ambitions for further hotels: palaces at once reminiscent of Scottish castles and French châteaux, luxuriously appointed with all amenities, and architecturally so memorable that they would become landmarks for their respective locations. Just as the Eiffel Tower had come to represent Paris, so they too would become signifiers for their settings. Over the course of the twentieth century, Canadian Pacific Hotels, as the subsidiary was named, expanded, going on to acquire properties established by its rival, the Canadian National Railway. And soon, there would be steamships too, enabling guests to travel effortlessly from Europe and the United States, to Quebec; thence by train across Canada to Vancouver; and from there across the Pacific to Hong Kong. Suddenly the world was accessible to travelers—and to trade—in a way it had never been before. Meanwhile, Fairmont Hotels had grown globally too.

In 1999, the two companies merged to form Fairmont Hotels and Resorts. 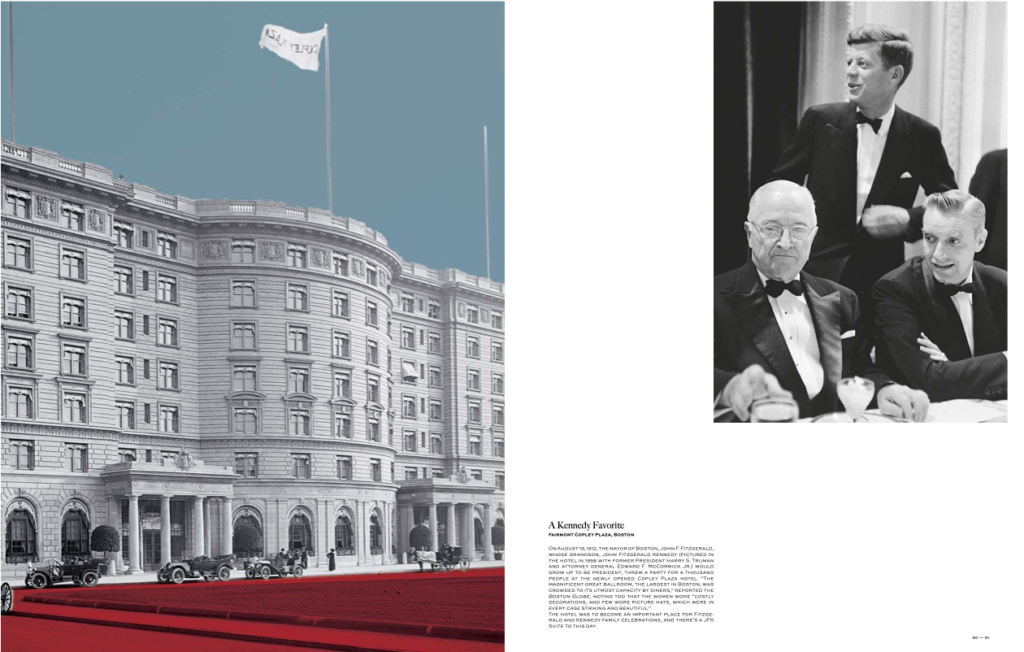 A History of hospitality, architecture and guests From the first pages, we are immersed into the history of the creation of Fairmont. Echoing the wonderful endeavor of railway, the flourishing of Fairmont palaces and Chateaux-hotels in North America results from a succesful combination between Luxury and Nature.