The birth and development of a legendary publishing house

In 1928, at the age of 24, Alberto Schira – born in 1904 in Geneva to a family of Italian origin who had moved to the French-speaking part of Switzerland for work – Gallicised his name and founded, in Lausanne, the company Albert Skira–Livres d’art. Its first, very modest office was a little room within the Hôtel de la Cloche. The young Skira engineered an encounter with Pablo Picasso, whom he had persistently courted with a view to making a splash with what would be his first publication. He patiently waited almost three years before, in 1931, the painter handed over his 30 etchings for Les Métamorphoses d’Ovide. Those highly carnal etchings, overflowing with sensuality and dominated by the theme of death, would compose Skira’s first volume: only 145 copies were printed, on fine paper, and issued on 25 October 1931, the day of the artist’s fiftieth birthday.

Between Picasso and Skira, a long-lasting friendship would be interwoven with an intense partnership: the Spaniard would inspire, amongst others, Minotaure, the Surrealist magazine that was to revolutionise the horizons of the art journal and those of art itself. In 1948, one of the first books in the contemporary section of the series Les Trésors de la Peinture française, with an essay by Tristan Tzara, was given over to Picasso. 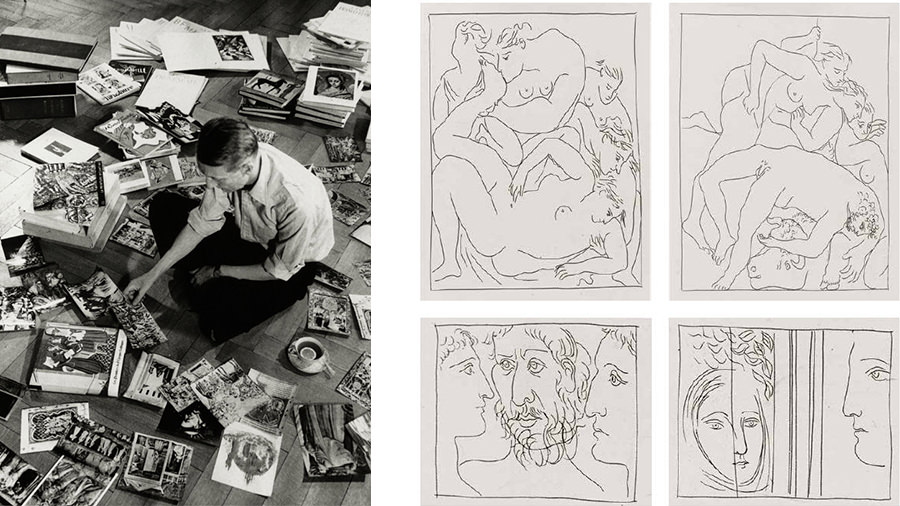 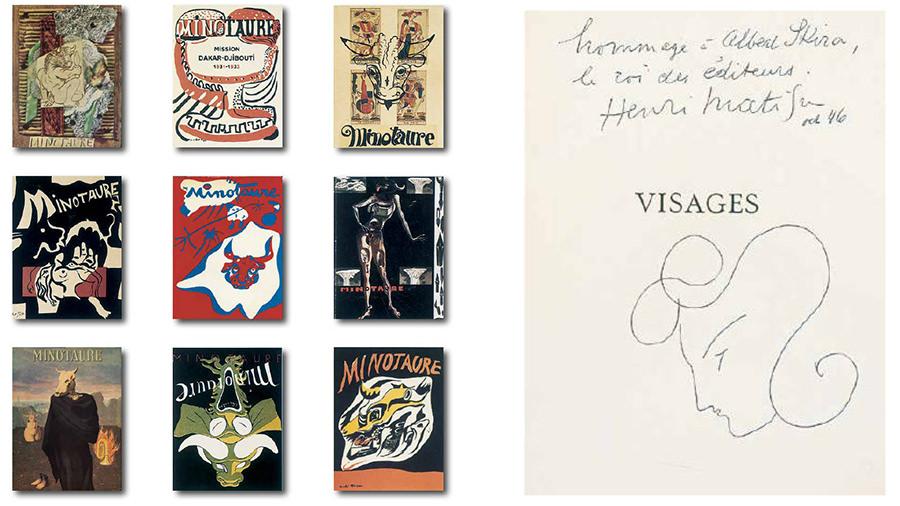 Skira and Picasso would continue to meet up, often in the artist’s Paris studio, until 1973, the year in which both of them passed away.

When Skira requested that he illustrate the poems of Stéphane Mallarmé, Matisse was over 60 years old. The book, illustrated with 29 rarefied etchings, came out in 1932 in an edition of 145 numbered copies. A mainstay of all of Skira’s early publishing endeavours, Matisse contributed to the magazine Minotaure, for which he drew an unmistakably pared-down cover, and designed series as well as artist books. He was also responsible for the 126 plates of the ambitious Florilège des amours de Ronsard, conceived in 1941 but printed seven years later.

As it did for Picasso, Skira dedicated one of the first volumes of the contemporary section of the series Les Trésors de la Peinture française to Matisse, with a memorable essay by Louis Aragon entitled “Matisse. Apologie du luxe”.

With Albert Skira not yet 30 years of age, 1933 saw the appearance of the first issue of Minotaure, on the pages of which the entire Surrealist movement found an outlet for absolutely free expression. Together with the two mentors André Breton and Paul Éluard, contributors included Miró, Giacometti, de Chirico, Magritte, Tanguy, Matta, and Man Ray; Picasso, Matisse, Dalí, Derain and Balthus were the main inspiration behind the magazine. Minotaure was a wide-ranging publication that expressed and interpreted the contemporary intellectual scene, taking in everything from art and psychoanalysis – it was here that Lacan’s earliest essays were published – to literature, music, archaeology, architecture, and photography.
In July 1934, Skira issued an edition of 210 copies of Lautréamont’s Les Chants de Maldoror, one of the Surrealists’ favourite books, illustrated with 42 etchings by Salvador Dalí. Albert Skira wanted the Trésors de la Peinture française to be a sort of “library cum museum” bringing together a selection of the main masterpieces of the French school; these large-format volumes were enriched by memorable reproductions that rendered them much more than mere artist books. The debut came in 1937 with Jean-Antoine Watteau and would be followed by around 20 titles covering all of the centuries – from the primitives to Toulouse-Lautrec, Henri Rousseau and Maurice Utrillo. 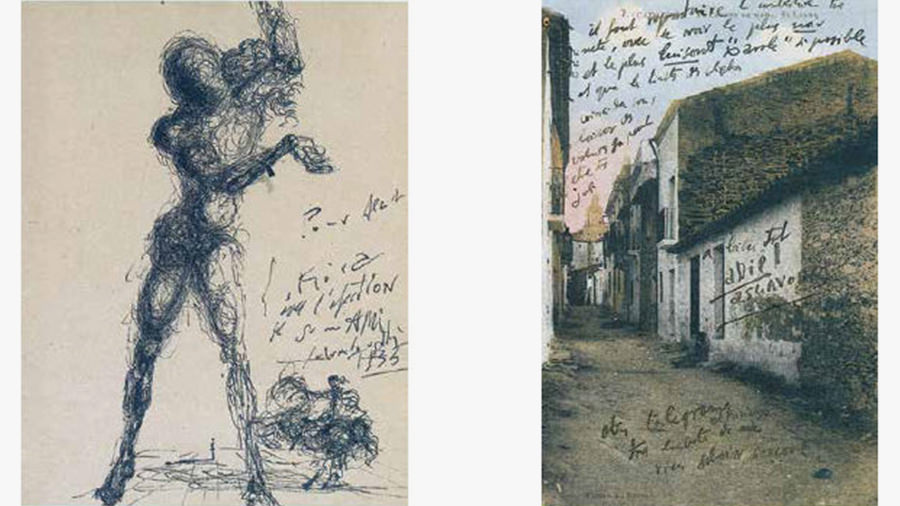 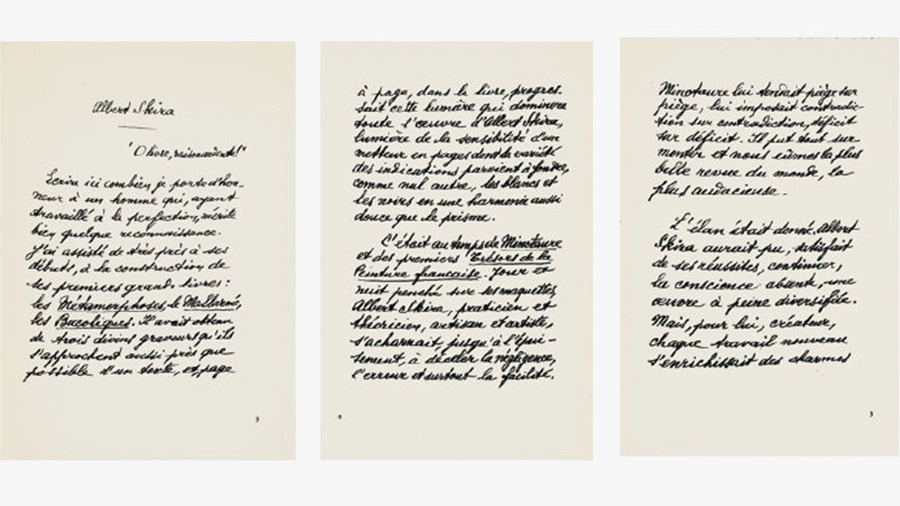 In 1948, Skira celebrated its twentieth anniversary with the publication of a small catalogue; the cover was dominated by a female head drawn by Matisse, which would go on to become a sort of logo for the Geneva-based publisher. The introductory essay was penned by Paul Éluard. As the booklet demonstrated, over its first two decades Skira had showcased work by the leading artists, men of letters and thinkers of the Francophone world, consolidating its position as one of the principal players in the field of French arts and culture publishing. Albert Skira had the ability to establish fruitful relationships with prestigious intellectuals, artists and writers, who remained loyal to him as his publishing house grew, constituting a “network” before the term was coined. From Aragon to Tzara, a plethora of the leading lights of twentieth-century French culture had very close links to this Swiss publishing house.

The growth of Skira on the international scene

The 1950s and 1960s marked the growth of Skira on the international scene. Publication began of the renowned Grandes Livres, with the plates applied, reproduced and printed at a level of quality hitherto considered unthinkable. The various series being published were well-structured and ambitious, ranging from histories of the great schools of painting (Italian, French, Flemish) to the treasures of the Eastern civilisations, while also casting an eye on the emerging phenomena of the contemporary world, such as the American art scene. Numbering among Skira’s authors were the foremost art historians of the time, from Lionello Venturi to André Chastel and Giulio Carlo Argan, as well as literati and poets such as Louis Aragon, Roland Barthes, and Jacques Prévert. Skira’s distinctive logotype, with its elongated capital letters, had by now become something of an “appellation d’origine contrôlée”: no other publisher on the international scene could rival its output. Skira published under its own brand in all languages – a brand that became synonymous with art books of the highest quality around the world.

1973: Albert Skira died prematurely, in the same year as his friend Picasso. His family, and especially his wife Rosabianca, daughter of Lionello Venturi, endeavoured to keep the business flourishing along the lines set down by the founder, returning to the formulas that had first led to the publishing house’s international success. But the publishing world was undergoing a profound transformation in terms of content, technologies, and distribution. While the Skira brand remained an illustrious one, the operations and, indeed, the ambitions of the publishing house were gradually scaled back.

Twenty years on from the death of the founder, the company was bringing out no more than 10 new books a year, still glorying in its legendary catalogue that had resisted the merciless ravages of time. 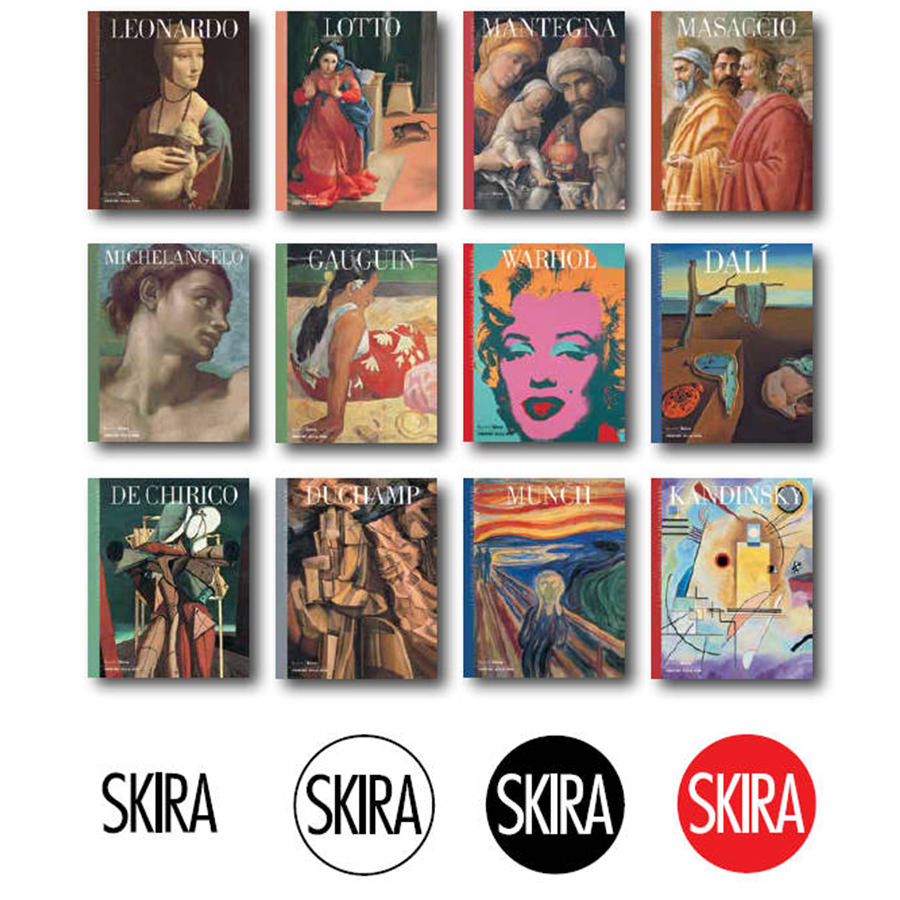 Giorgio Fantoni and Massimo Vitta Zelman acquired first the Skira brand, and then the whole company, transferring the headquarters to Milan. Under the guidance of an illustrious advisory board – including such respected names as Federico Zeri, Carlo Bertelli, Vittorio Gregotti, Germano Celant and Emilio Tadini, as well as Pierluigi Cerri who was responsible for the brand’s corporate identity – the publisher rediscovered its international vocation by starting once again to print and distribute volumes in multiple languages on the visual arts, alongside archaeology, primitive art, photography and fashion. The nineteenth and twentieth centuries are covered in the Archivi dell’Arte moderna (Archives of Modern Art), which soon garnered a reputation as reference texts for students, collectors and the market, while the lively Skira Paperbacks document the debate on the contemporary art scene. Skira also entered the exhibitions sector, rapidly becoming a leader in the production of catalogues for major Italian and European shows; since the late 1990s, the publishing operations have been complemented by the orchestration of high-profile exhibition events, for which Skira manages the entire staging in partnership with Italian public-sector institutions. Over the same period, the company has carved out a niche in the museum services sector, opening Skira-branded Italian bookshops at exhibitions and within museums. With their extensive range of editions and merchandising, these stores have proved extremely popular with aficionados and art tourists visiting Italy. Riding the wave of the so-called “covermounts”, Skira came up – in collaboration with the Corriere della Sera newspaper – with the exceptionally successful Classici dell’Arte (Art Classics) series: 90 monographs on the leading lights in the history of art, from Giotto to Andy Warhol, which ended up selling more than 20 million copies via news kiosks.